The fruit and nut trees here seem to ripen late - the redcurrants were on time and we've been eating well on stewed quince, but the pears are still a little hard and most nuts are taking their time. If we'd had a press set up in time, we'd have had more than enough cider apples to feed it, but that's going to have to be a task for next year.

The sweet chestnut tree has only this week dropped mature nuts. Unlike many nut trees, such as the hazel, you have to wait for chestnuts to fall to the ground. When ripe, their spiky green balls fall and split open, revealing the brown seed inside. Early fallers are likely to be unfertilised, with shrivelled nuts filled with a small amount of inedible stringy flesh.

The spiny protective fruit surrounding the nut often splits when it falls, particularly if you've got a properly ripe nut. This makes it easier to get into the thing without being prickled, but you'd still be well advised to wear sturdy gloves.

Before either cooking or planting your chestnuts, check them for pin-sized holes indicating that the larvae of one of several moths, weevils and other nasties has taken up residence. Dispose of these, as the extra protein isn't really worth the unpleasantness of damaged chestnut flesh. It's worth giving your chestnuts a quick rinse in a bowl of water to drive out any other lurking pests, too. 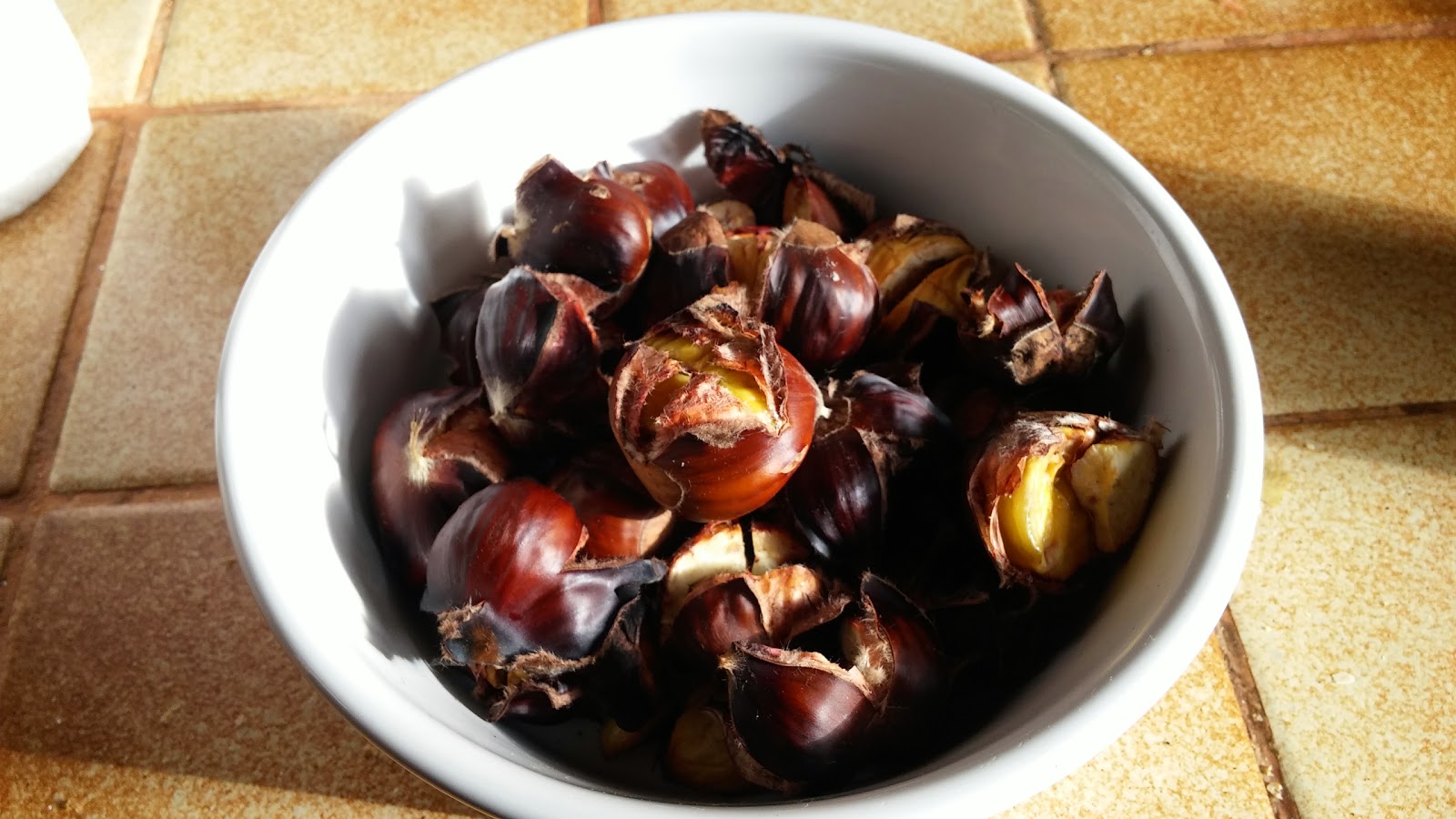 Heat an oven to gas mark 6 (200 degrees). While that's going on, get out a small, sharp knife and cut X shapes into each chestnut. Most of them will have a relatively flat side - keep this down while you're cutting. Once your oven's up to temperature, chuck the chestnuts onto a lipped metal tray, and bake at the middle of the oven for 30 minutes.

Take them out and - if you have any sense - allow them to cool for a bit. Or, if you, like us, lack self-control, try not to burn you fingers and lips too badly while peeling and devouring scalding-hot, sweet, yielding chestnut flesh.

We couldn't resist cooking and devouring this lot in its entirety, but the next batch we collect is destined for planting, as our solitary chestnut tree could do with a friend at some point in the future, and on of our field boundaries is looking a little sparse
Posted by Unknown at 11:01