We're back, after an extended time away from the online world. Much of the past year-and-some has been spent getting the land back into a usable state, which has mostly involved clearing of unwanted growth, quite a lot of digging and turning of soil, watching some horses eat grass and fertilise fields and other slow-moving tasks that don't exactly lend themselves to exciting blog posts. 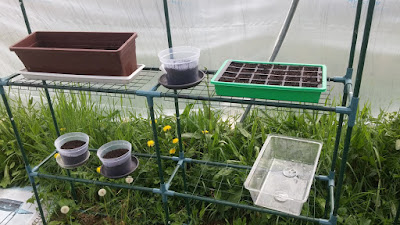 The polytunnel finally went up last autumn... in related news, plastic sheeting is really heavy, commercial polytunnel kits are poorly documented, and however securely you think you've planted the tunnel arches' feet, it's not secure enough. But! It went up, and it's stayed up, even in the face of 150kph winds.

We've been getting cracking on spring planting -- the ground temperatures are still getting down to below freezing some nights, so there's lots going on in trays, propagators and pots on raised shelves. 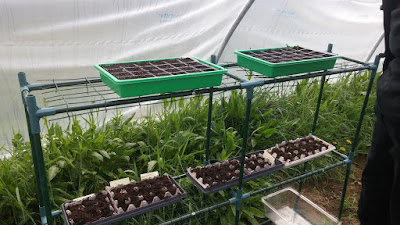 The shelving units are made out of the remains of a mini plastic greenhouse frame (this item was not designed to survive a gusty breeze, let alone serious winds), while the shelves are mostly made out of some scrap wire mesh. Shelves are incredibly useful. There is no such thing as too many shelves. 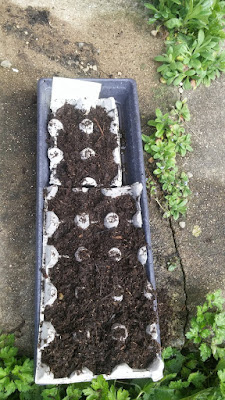 You end up reusing and repurposing a lot  of stuff if you have any sense.

Spare box planter trays plus egg cartons are ideal propagators, with the added bonus of being biodegradable.

Cut off the bottom of a plastic water bottle to make a handy scoop for use in giant compost bags.

And almost anything can become a pot with sufficient imagination.